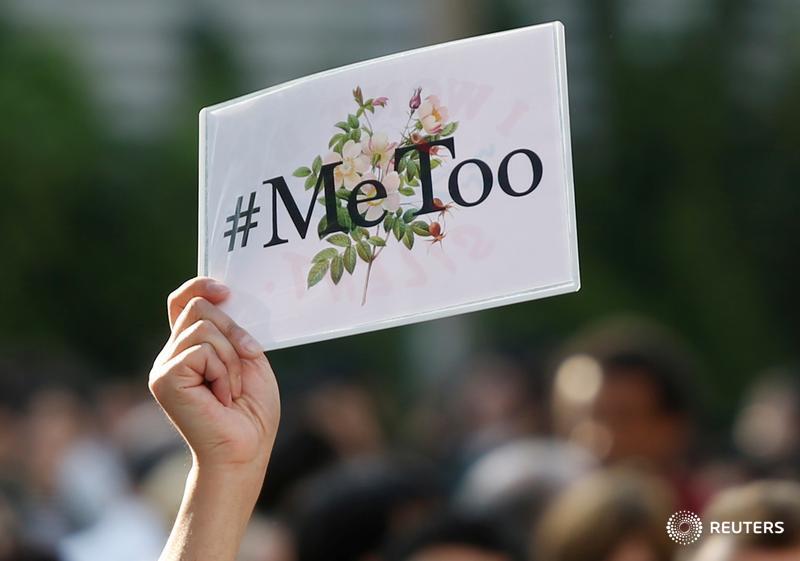 A protester raises a placard reading "#MeToo" during a rally against harassment, April 28, 2018. REUTERS/Issei Kato

The company and law firm names shown above are generated automatically based on the text of the article. We are improving this feature as we continue to test and develop in beta. We welcome feedback, which you can provide using the feedback tab on the right of the page.

October 5, 2021 - One of the most significant statutory reactions to the #MeToo Movement were laws passed in several states purporting to restrict the enforceability of pre-dispute mandatory arbitration clauses in the employment context. The enforceability of such statutes themselves, however, remains in legal limbo.

In 2018, New York state passed such a law — C.P.L.R. § 7515 — which has become a critical test case for the viability of these state-level legislative efforts. For women's rights advocates, labor organizers, corporate executives, employment counsels, and employees of large organizations generally, the recent decision by the 2nd U.S. Circuit Court of Appeals in Tantaros v. Fox News Network, LLC held the potential to be a landmark opinion (2021). While the Second Circuit's decision did not finally resolve all issues concerning the enforceability of Section 7515, it did clearly frame the issues for the trial court and offered important commentary.

With Section 7515, the New York Legislature sought to address what it considered a "scourge of sexual harassment." (Stenographic Rec., 2018) Responding to policy arguments by employees and women's rights advocates that pre-dispute mandatory arbitration clauses play a role in allowing harassment to continue by shielding challenges to such conduct from public scrutiny, the Legislature passed Section 7515, and none other than then-Governor Andrew Cuomo signed it into law. The version passed in 2018 precluded pre-dispute mandatory arbitration agreements only for sexual harassment claims, but it was expanded in 2019 to include all employment discrimination claims.

In its present form, C.P.L.R. § 7515 provides, "except where inconsistent with federal law," no written contract shall contain any clause or provision requiring that the parties submit to mandatory arbitration to resolve any allegation or claim of discrimination. It further provides that any mandatory arbitration clause relating to such claims "shall be null and void." The law does not purport to interfere with agreements to arbitrate claims other than discrimination or harassment claims, or agreements to arbitrate entered into after a dispute arises.

The Federal Arbitration Act (FAA) looms over all of this activity. Since 1926, the FAA (9 U.S.C. § 2) has made clear that any agreement to submit disputes to arbitration "shall be valid, irrevocable, and enforceable, save upon such grounds as exist at law or in equity for the revocation of any contract."

In 2001, the U.S. Supreme Court confirmed that the FAA applies to employment agreements, subject only to minor exceptions. The FAA also preempts state law, and thus the New York Court of Appeals has confirmed that mandatory arbitration agreements are enforceable to require arbitration of employment disputes even where the cause of action arises under New York state law.

New York was not alone in squaring up against the long-established approach of the FAA. California (A.B. 51), Maryland (H.B. 1596), New Jersey (S.121), Vermont (H.707) and Washington (S.B. 5996) have each also passed statutes precluding the enforcement of mandatory arbitration clauses in employment contracts for sexual harassment claims, albeit in slightly different ways.

All of these laws pose the same challenge to the FAA: Will courts carve out an exception for sexual harassment or other discrimination claims to enforcement of arbitration agreements, or will it uphold the FAA's broad favorability toward private dispute resolution?

For years, advocates for employees have argued that pre-dispute mandatory arbitration agreements are often entered into unwillingly or unwittingly by employees, that they provide a forum that is systematically less favorable to employees, and that, by shielding disputes from resolution in a public forum, they serve to protect harassers and facilitate the continuation of abuse.

On the other hand, advocates for arbitration have long argued that it provides a cheaper, faster, and more efficient mechanism of dispute resolution by subject-matter experts. Each of these factors may benefit employees as much as employers. In addition, arbitration proponents point out that in many circumstances employees, as much as employers, may prefer to have disputes about sexual harassment litigated in a private setting.

At core, the normative debate about whether mandatory arbitration clauses should be enforced mirrors the discussion of arbitration clause enforcement with asymmetrically powerful parties generally, but perhaps raises the stakes. Each case is unique, and the advantages to arbitration of speed, confidentiality, flexible evidentiary and procedural rules, and often lower costs can favor parties in each camp. There are immutable interests, too. Enforcing an arbitration agreement favors the sanctity of contract and the sovereignty of private parties to contract, even if those concepts may ignore any inequities in parties' negotiating power when entering into an agreement. Allowing mandatory arbitration agreements also ensures that the parties preemptively waive their right to a jury trial and secondary review, judicial safeguards that often — though by no means always — favor the less powerful party.

Both for the individual parties to a dispute, and for anyone who enters the workplace, the decision to enforce pre-dispute agreements to arbitrate sexual harassment claims is very significant.

In the first high-profile case considering C.P.L.R. § 7515, Latif v. Morgan Stanley Co., the U.S. District Court for the Southern District of New York held that the FAA preempted the New York law, and that it was therefore unenforceable (2019). The court determined that because the New York law voided agreements to arbitrate sexual harassment claims "except where inconsistent with federal law," it could not preclude the arbitration of such claims here because it was, simply, inconsistent with the FAA's policy of favoring arbitration as "a matter of contract." The court stayed the judicial proceeding on that basis, pending the outcome of the arbitration.

The following year, in Newton v. LVMH Moët Hennessy Louis Vuitton Inc., the New York Supreme Court enforced C.P.L.R. § 7515, denying the employer's motion to compel arbitration, and disregarding the federal precedent (N.Y. Sup. Ct. 2020). The New York Supreme Court's decision hinged on a narrow reading of the FAA as limiting its application to "a transaction involving commerce" and, noting the important public policy of preventing sexual harassment, held that the arbitration agreement in issue was void.

On appeal, however, the New York Appellate Division reversed this holding on the limited basis of the statute's retroactivity, and deferred consideration of the substantive question. On review, the court held that C.P.L.R. § 7515 was not "retroactively applicable to arbitration agreements" entered into before its enactment, which precluded its application in that case. The court therefore decided it did not need to reach the thornier question of whether the FAA conflicts with the New York statute. The Appellate Division permitted Newton's claims to proceed via arbitration.

Into these murky waters comes Tantaros. In that case, the plaintiff, Andrea Tantaros, first sued in New York state court for sexual harassment and retaliation, seeking a declaratory judgment that the arbitration clause in her agreement was void under C.P.L.R. § 7515. (Tantaros v. Fox News Channel, LLC (S.D.N.Y. 2019)). The defendant successfully removed the case to federal court, on the basis that there was federal question jurisdiction as to whether the FAA precluded the claim in state court. The Southern District denied plaintiff's application to remand but granted plaintiff's motion to permit immediate appeal of the denial.

On appeal, the Second Circuit ultimately affirmed the decision to deny remand to state court. Rejecting each of Tantaros' arguments, the Second Circuit held: (1) Tantaros' claim implicated an issue of federal law; (2) the issue was substantial to the federal system generally; and (3) the balance of federal and state responsibilities would not be severely altered, because many cases would not be diverted from state to federal court.

Despite its detailed consideration of C.P.L.R. § 7515 in the context of the FAA, the Second Circuit declined to rule specifically on the core substantive matter: whether C.P.L.R. § 7515 is preempted by the FAA. That question lives on and will next be considered by the Southern District on remand. The weight of cases leans in favor of enforcing arbitration agreements under the FAA even despite state statutes like C.P.L.R. § 7515 that would indicate a carve-out for claims of sexual harassment or other forms of employment discrimination. Such an outcome, however, remains uncertain. Stay tuned.

Regardless of the ultimate outcome of this issue, the FAA's permissive stance on the enforceability of arbitration agreements remains applicable and central. While broadly applicable, the FAA is nevertheless limited to arbitration agreements in interstate commerce, so there remains an open question about whether agreements with an employer operating solely and strictly within a single state might still be subject to C.P.L.R. § 7515 or its brethren in other states.

In light of the disparate treatment of claims involving C.P.L.R. § 7515 by New York state and federal courts, a plaintiff seeking to enforce an arbitration agreement is more likely to be successful where it files in federal court, while a defendant wishing the same should remove a state court case to federal court at the first opportunity to do so. In contrast, a party endeavoring to avoid the enforcement of a mandatory arbitration agreement may find state court to be a more advantageous forum. Precedent indicates, however, that maintaining the action in state court may be an uphill battle.

Lastly, employers writing arbitration agreements should follow best practices, entirely apart from the potential applicability of state nullification laws for claims involving discrimination or harassment. Arbitration agreements are more likely to be upheld where they do not disfavor the party with less bargaining leverage. Employers should ensure that an employee is not forced to bear unreasonable costs, attempt to vindicate claims in an inconvenient location, or waive important procedural safeguards such as participating in the arbitrator selection process and being able to submit and review evidence.

It may also be prudent to provide that the agreement to arbitrate applies "to the extent permitted by law," and to provide for severability of the arbitration clause, so that a successful challenge to its enforceability does not invalidate the contract as a whole.

Opinions expressed are those of the author. They do not reflect the views of Reuters News, which, under the Trust Principles, is committed to integrity, independence, and freedom from bias. Westlaw Today is owned by Thomson Reuters and operates independently of Reuters News.

Jyotin Hamid is a partner and litigator at Debevoise Plimpton LLP. He handles complex commercial litigation matters, with a particular focus on employment litigation. He has handled whistleblower, discrimination, contract, compensation and corporate raiding litigations and arbitrations involving high-level executives in a range of industries. He is based in the New York office. He can be reached at jhamid@debevoise.com.

Adrian St. Francis is an associate in the Litigation Department with Debevoise Plimpton LLP, and his practice focuses on complex commercial litigation and employment law matters. He is based in the New York office. He can be reached at astfrancis@debevoise.com.

Chris Daniel 2 days ago
previous post next post
We use cookies to ensure that we give you the best experience on our website. If you continue to use this site we will assume that you are happy with it. Ok